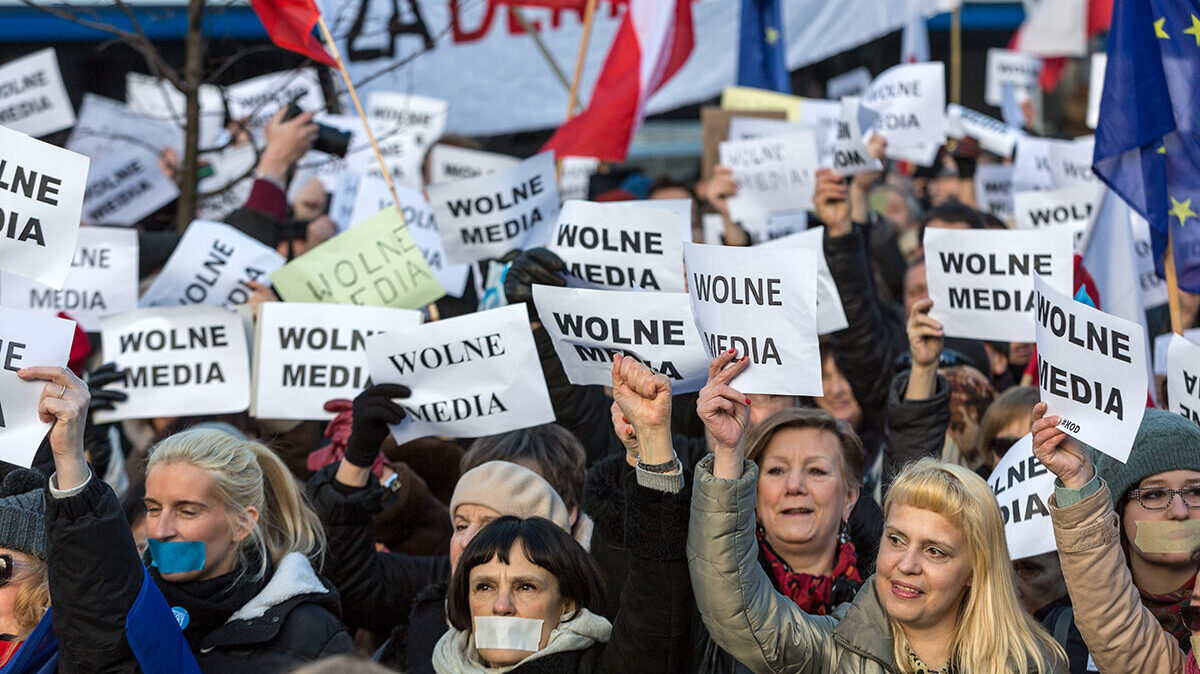 The subject of media freedom has emerged as the latest test to the EU’s values and unity, with isolated but serious challenges to the press and independent media across a number of member states yet to be met with a firm response by the bloc. Over the last few months alone, the proposal of a controversial media advertisement tax in Poland, the end of broadcasting by independent radio station Klubrádió in Hungary, reports of a “war on the media” by Slovenian PM Janez Janša, and interference in the independence of the public broadcaster in the Czech Republic have brought the issue to the fore. There are also grave concerns about media ownership and political influence in Bulgaria and Greece.

Most recently, the Polish Government has launched one of the most brazen attacks on media freedom by steering legislation through the Sejm, the lower house of the Polish parliament, which will ban foreign companies from owning media outlets. This has been widely interpreted as an attempt to throttle the independence of the most influential private TV station, TVN, in which Warner Brothers holds a majority shareholding. If confirmed by the Senate and the President, it will force Warner Brothers’ filial, Discovery, to sell its holding. Jarosław Kaczyński, the power behind the throne of government, has called this “the re-polonisation of the media“. We warmly support the more than 1,000 of our Polish colleagues who have signed an open letter protesting against the new law.

Until now the EU has been slow to respond to the attacks on media freedom in several member states and has rightly faced criticism for its inaction. In a European Parliament debate in March, a number of MEPs condemned Poland, Hungary and Slovenia over their attempts to restrict independent media. Commissioner Věra Jourová on that occasion responded by calling for more tools to protect journalists and independent media, lamenting the “limited” options currently available to the executive.

Yet the situation continues to deteriorate. The most recent World Press Freedom Index published in April this year by Reporters Without Borders saw Slovenia, Poland, and Hungary all fall in their media freedom rankings, with the watchdog noting the EU’s existing mechanisms have not been able to stop the “draconian measures” taken in some member states.

In the Czech Republic, there are growing concerns over government interference in the public broadcaster, Czech Television. Opposition MPs voiced criticism of the selection process for new members to sit on the Czech Television Council after the Electoral Committee of the Czech Parliament’s Chamber of Deputies whittled down a list of 56 applicants to a dozen shortlisted names, featuring a number of candidates critical of the broadcaster’s current management and work. The Council has the power to have the CEO dismissed, something opposition MPs believe is the government’s aim. The European Broadcasting Union has expressed its concern about the situation, warning the independence of Czech Television is under threat and noting “the increasing politicisation of its governing body” alongside efforts to “undermine” the broadcaster’s current management.

Bulgaria represents the nadir of media freedom not just in the EU but well beyond as it stands at 112th in this year’s World Press Freedom Index. Here the oligopoly controlling the great majority of media outlets cooperate openly with impunity. There is overwhelming evidence that journalists sacked for refusing to tow an editorial line will find it impossible to secure employment elsewhere. The extreme narrowing of editorial opinion in Bulgaria has taken place chiefly during the long Prime Ministership of Boyko Borissov. Both elections held this year were inconclusive and a caretaker government is now running the country. In advance of a probable third poll in December, the European Union must impress upon any incoming administration that it is actively screening media plurality in the country.

In neighbouring Greece, in addition to the concentration of much of the media in the hands of a small group of oligarchs, several of whom have alleged criminal connections, there is the additional fear of violence against journalists. In April this year, veteran reporter Giorgos Karaivaz was shot dead near his house in Athens in an act with the hallmarks of a mafia-style execution. Meanwhile, police are investigating reports of a conspiracy to assassinate another leading journalist, Kostas Vaxevanis. These disturbing trends in Greece underline how dangerous it has become within the EU to investigate corporate malfeasance on a grand scale as the murders of Ján Kuciak and Daphne Caruana Galizia in Slovakia and Malta respectively have already demonstrated. More recently, we were deeply saddened to hear of the murder of the courageous Dutch investigative reporter, Peter de Vries, in July this year.

In February, one of Hungary’s last remaining independent radio stations, Klubrádió, finally came off air following an 8-year battle, after being stripped of its broadcast licence. In a written response, the European Commission said the case had only “deepened their worries” about Hungary, adding they had “encouraged” Hungary to allow Klubrádió to continue to use its frequency. But the station had first sought EU assistance as far back as 2016, and the Commission has come under sustained criticism for being too passive and for not reacting more forcefully.

In Slovenia, there is talk from journalists and watchdogs of a “climate of fear” as PM Janša attacks journalists critical of the government. Commissioner Jourová called on Interior Minister Hojs to do more to protect individuals who experience attacks, and the EU is said to be working on a systematic approach to deal with threats to journalists across the bloc. There have been calls for even greater action however, with Dutch MEP Sophie in ‘t Veld claiming the EP should already be monitoring Slovenia’s rule of law and media freedom compliance, warning Slovenia could be “the next autocratic country in the EU”.

In Poland meanwhile, seven months after EU leaders struck their landmark €1.8 trillion deal to resuscitate Europe’s economies in the wake of the Covid-19 crisis – a pact at least partly predicated on the adherence by member states to the bloc’s core principles – Poland’s right-wing PiS government appears set on a collision course with Brussels that will test both sides’ commitment to upholding media freedom and the rule of law.

Critics say a new law being discussed to impose steeper taxes on media company earnings risks suffocating much of the country’s independent journalism. While the Morawiecki government is adamant the proposed legislation simply seeks to ensure social justice, arguing international media giants are suffocating local Polish outlets, many fear an ulterior motive to constrain criticism is behind the change; one media executive described the government’s aim as “more or less copying the Hungarian approach – to diminish the viability of the independent media,” adding: “The money will just go to propaganda operations close to PiS.” One opposition MEP described the planned tax as “simply the nationalisation of the media”.

As the FT recently noted, the stand-off over private media is “the latest in a series of disputes” that have put Warsaw “at the centre of a contest about Europe’s political and cultural values”.

The EU worked hard to placate Poland and Hungary in the budget debate and came under strong criticism for allegedly favouring Poland in its compromise action. It remains to be seen if it will look to take a similar approach now, or if this is even possible in the face of real threats to media freedom.

Last September, Commission President von der Leyen talked about the EU being a Union of values – if that is to mean anything then Europe cannot stand by while independent media is under such targeted attack.